Social commerce is seeing a rise in Indonesia as the internet penetration and mobile broadband penetration rates increase. While these trends create a wave of opportunities for businesses, they find it challenging to reach out to its target audience at the same time.

Indonesians are also highly connected in the social space. A majority of Indonesian internet users spend most of their time on facebook and instagram, with facebook users climbing to 70 million and Instagram users numbering close to 20 million in 2015. Social sites like facebook and instagram experimentation of new ways to enable business transactions on their platforms, combined with Indonesia’s fixation on social media, makes Indonesia ripe for social commerce growth.

Get more customers with the services we provide

Women with age between 25-34 will be the main demographic driving e-Commerce, they influence directly and indirectly 75% of the online purchases. Women spend more time online and buy more. Being able to offer them inspiration and the products they are looking for will be key to win the market.

Indonesian users aren’t on social networks only to stay connected with family, friends, and colleagues. They use the same channels to sell goods. According to a 2014 report by Singaporean logistics firm SingPost, nearly 27 percent of all e-Commerce sales happen through social media.

And really, why not? There’s no simpler way to sell a product than to post a photo on your existing channels and name the price. For small-scale sellers with an immediate connection to their customers this model might be just right. 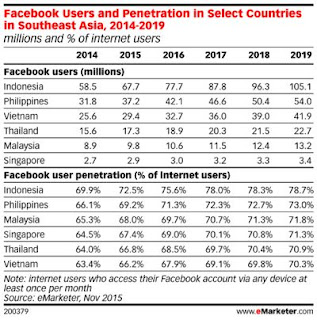 Facebook, Three in four Indonesians using the Internet are also using Facebook. (That number is even higher as a percentage of total social media users in Indonesia – 94%). This is one of the highest Facebook penetration rates in Southeast Asia and ranks Indonesia (with 78 million Facebook users) fourth in global Facebook users by country.

eMarketer predicts there will be more than 100 million Facebook users in Indonesia by 2019.

Instagram, is growing in popularity in Indonesia and currently ranks second most popular social network behind Facebook for young people, according to January research from eMarketer.

Citing a survey from mobile research firm JakPut, it found 87.5% of mobile Internet users aged 16 to 35 used Facebook in the past week. This was followed by Instagram at 69.2% and Twitter at 41.3%.

The highest demographic to use Instagram was the 20 to 25 age group at 73.8%. What’s interesting, is how they use the platform. According to the report, top pastimes on Instagram include exploring online shopping accounts, checking funny or joke accounts and posting travel photos.

Twitter,  comes in third as most popular social media platform in Indonesia, with close to 17 million users.  In recognition of the importance of this market, Twitter opened an office in Jakarta in March 2015. It launched self-serve ads a month later – specifically targeting the country’s millions of small to medium businesses.

The social media platform has also been credited for its role in the Indonesian presidential elections in 2014.

Denny JA, the founder of Indonesian Survey Circle, had 2014’s second most retweeted tweet when he posted in favor of Joko Widodo’s presidential bid. Here’s the tweet:

Easy of browsing is the most common reason to purchase online, as well as cheaper prices when buying software / hardware, gadgets and luggage.

In the end brands need to keep their ears to the ground as the Indonesian market continues to evolve with constantly changing technologies and consumer shopping habits. If the numbers are any indication of what is to come, Indonesia will continue to grow and making social commerce one of the major entry points for e-Commerce success in Indonesia. If you dont have any idea how to start. we as a e-Commerce solution can help you to build and solve the problem. You can contact or email us anytime at halo@8commerce.com